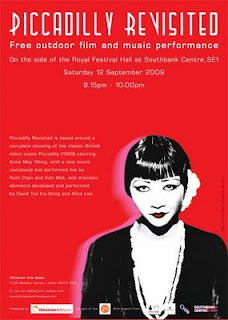 This is a free performance on Saturday 12th September (as part of the Thames Festival) at the East-facing facade of Royal Festival Hall, 8.15pm - 10.00pm.
The classic E.A. Dupont silent film Piccadilly starring Anna May Wong will be screened, accompanied by a new score from composers Suki Mok and Ruth Chan. The score is based on a storyboard developed by co-writers Alice Lee and David Tse Ka-Shing.

The performance is presented by Chinatown Arts Space and you may remember Suki Mok from the project in 2008 at the Royal Opera House with Beijing rappers Dragon Tongue Squad.
Ruth Chan is a London based pianist and film composer with an interest in ethnic fusion music.

David Tse Ka-Shing is the Creative Director at Chinatown Arts Space and has done a lot of good work in both encouraging and producing British East Asian arts. He has many fiddles to his bow, being an actor, writer, theatre director and film-maker.

I recognised Alice Lee's name because last year she wrote and produced Dragon Lady: Being Anna May Wong which she performed at the Edinburgh Fringe Festival.

This is a work-in-progress and next year the cross-artform production will be completed completed next year; incorporating dance, drama and video against a backdrop of the original silent film.

I look forward to the screening and to seeing the completed work next year. Piccadilly is a wonderful film to watch and raises many questions about race and sexuality. Anna May Wong seems to be back in vogue in 2009, long may this trend continue.
Posted by Lucky Cat Zoë at Wednesday, September 02, 2009